“It is easier to put a man on the moon than to reform public schools.” Jerrold Zachiarias, 1966*

“Changing schools is like moving a graveyard.” Hyman Rickover, 1983**

“In the four decades between when I started teaching English at T.C. [Williams High School in Alexandria, Virginia] in 1970 and my retirement this year, I saw countless reforms come and go; some even returned years later disguised in new education lingo.” Patrick Welsh, 2013****

These four quotes capture the clash of perspectives among ardent school reformers over the past century. Are schools rigid, unbending, self-protecting bureaucracies that seldom make deep and lasting change in governance, curriculum, and classroom practice? Or are schools faddish-driven institutions rushing to keep up with the most recent cure for whatever ails schools?

Sure, it sounds like a false either/or choice fitting the crisis-tinged rhetoric driving each wave of reform yet the historical facts are clear that all fads don’t take hold in classrooms and most schools do change in important ways. Those who indulge in the rhetoric of  reform relish dichotomies because they fit their  either-this-or-that world.  The notion of a spectrum where differences are arrayed along a continuum with a middle ground is anathema to those reformers who traffic in Chicken Little exclamations of the sky is falling.

The “chronicle of fads” crowd, mostly practitioners, point to the history of reform-after-reform and how few stick. Veteran teachers like Patrick Welsh have said repeatedly over decades that they have endured the onslaught of externally imposed “solutions” to “problems” that top officials, not teachers, had identified. Change? Schools do too much of it, this crowd says. 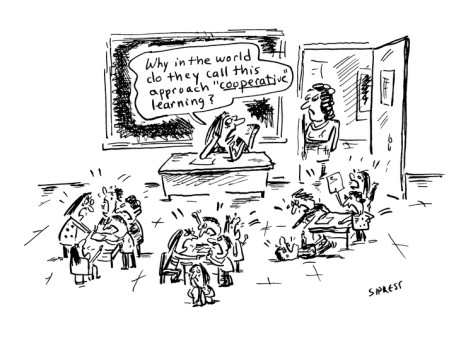 The “schools-never-change” crowd, mostly policy entrepreneurs, donors, and reformers whose experience in K-12 schools ended when they graduated high school, are convinced that most schools are rigid places horribly out of step with a 21st century economy and society so different from the time when public schools were structured to fit an industrial-based economy and society. You want “real” change, they say, don’t expect existing school officials to turn the Titanic to avoid the iceberg. what’s needed? Out with the old, in with the new. 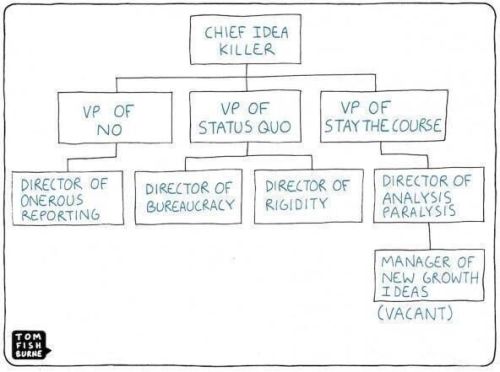 When posed as a dichotomy–what high-pitched reform rhetoric depends upon– choice is restricted to either one or the other view. Whether a dichotomy or a continuum, the fundamental issue turns on reformers’ assumptions about public schools’ capacity to adapt to changing conditions and the speed in which they enact those changes. These contrasting beliefs, I argue, fuel current debates over the menu of contemporary reforms ranging from charter schools to competency-based education to  “personalized instruction.”

To make sense of these contradictory beliefs about school change a few distinctions about the realities of schooling need to be made. First,  there is the landscape of U.S. schooling. Second, in a decentralized system of education, schools are dependent upon local voters and parents for money and political support, and, lastly, the difficult job of converting policies into practice.

Landscape of U.S. schooling. The capacity of schools to change depends upon zip codes. In middle- and upper-middle class districts where parents and taxpayers nudge elected school boards to respond to their concerns and wishes, districts adopt new programs, expand  student services, and keep patrons’ view front-and-center (see here and here). The district’s agility to alter what is and move toward what ought to be is seldom questioned. Changes–often called “improvements” rather than “reforms” are evident. The “schools-never-change” crowd seldom point to these districts.

But in large low-income, largely minority districts where low academic achievement and dropout rates dominate debates over what to do, reform churn in adopting one new program after another is normal yet few have any staying power beyond the tenure of the superintendent (see here, here, and here).

So if the evidence is there that districts in different zipcodes do indeed change albeit with very different results, why do these wannabe reformers spout such contradictory views of the capacity of the schools to change? They forget a basic fact of U.S. schooling.

Schools are political institutions that respond to their voters and parents. The statement is most obvious in suburbs and exurbs where citizen participation in schools runs far higher and is more intense than in large, urban districts. After all, school districts are wholly dependent on taxpayers, voters, and parents for funding, support, and legitimacy. Without all of these, district policies flounder and fail. So in many of suburban and exurban districts, school boards and administrators respond often to their citizens, adopt new programs, and help teachers implement new ideas. Such places  make changes in governance, curriculum, and daily operations. Change often bubbles up from the bottom and middle of the organization, not spouting always from the top.

Not so in large urban districts where school boards and large bureaucracies are distant from their patrons. In those big cities where mayors control the schools (Washington, D.C., New York City, etc.) citizen participation approaches nil. Elected boards in big cities give token representation to parents on advisory and ad hoc committees but taxpayers and voters have little leverage on what school boards enact, what superintendents do, and what happens in the local school. Nearly always, change comes from the top and moves downward to schools.

Because school districts are political entities, changes do occur but they vary considerably from big cities to suburban districts.

And this is where the third distinction becomes necessary. The schools-never-change crowd overlook where reforms get adopted and adapted in occasional big cities, suburbs, exurbs and see so many of their ideas and changes that they want in classrooms do not get put into practice as intended.

Reforms get implemented poorly. So often, policymakers bewail how their favorite reforms got mangled as they were put into practice. They blame superintendents, principals, and teachers for fouling up a beautiful way to improve schools (see here, here, and here, ).

Consider access and use of new technologies in classrooms. Tech magnates and well-endowed donors carp at urban and suburban schools not doing more with the devices and software they have in raising academic achievement and reducing the test score gap between minorities and whites; other critics point to unintended outcomes of using devices in lessons (see here, here, and here).

But changes do occur. New devices show up, professional development for teachers happens, many teachers integrate technologies into their lessons. But often these changes are neither enough or what reformers sought. The technologies were put into practice but not in the ways that reformers wanted.

In noting the landscape of schooling by zipcode, the political nature of schooling, and dissatisfaction with how reforms get implemented it becomes clear that nearly all schools do have the capacity to change and, in fact, have to change to meet political demands of patrons. And they do make changes albeit at varying speeds. Those changes, however, may not satisfy those who champion them and those expected to put them into practice.

The quotes that introduced this post about the capacity of schools to change and the speed in which they put them into practice mirror much current thinking among reformers and those charged to put changes into practice. The pumped up rhetoric of the “chronicle of fads” and “schools-never-change” crowds will continue to fuel much of the debate over school improvement. That many districts and schools do change will hardly alter that rhetoric but for serious reformers who are in the game for five to ten years, these distinctions about change may help to concentrate where they focus and what they do.

**Hyman Rickover, “Statement to Virginia State Board of Education,” July28, 1983.