The School of the Future: Automated Classrooms? (Part 1)

Technological fantasies of the future school have been around for decades. Here’s one from 1910. Note all of the information going into students’ heads comes from textbooks fed into a wood chipper. 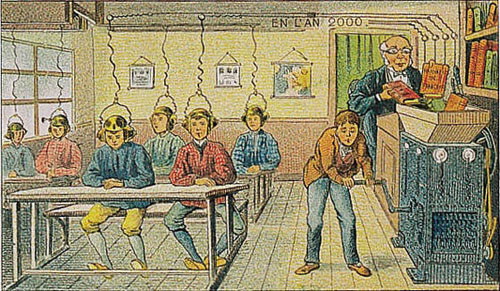 Or another from 1963 cartoon called “The Jetsons.”

Or this one in 1982 predicting that the future school will be monopolized by the then dominant company Atari.

And then “Meet The Classroom of the Future” in 2015 at David Boody Intermediate School (IS 228) in New York City.

Modeled after the School of One, an  innovative program that began in New York City a few years ago, sixth-to-eighth grade students work at their individual skill levels based on data collected from state and  school tests, diagnostic assessments, and past performance. From this data bank, software installed on laptops presents individual lessons tailored for each student to work through on the screen daily. These individual lessons become the day-to-day “playlist” for each student in various subjects. Teachers monitor, adapt, and enrich  lessons for each student.  The blended learning program at IS 228 touts “personalized instruction” for  over 800 students (2012) who apply to its varied magnet programs.

The journalist who described his visit to IS 228 began the article by saying: “The classroom of the future probably won’t be led by a robot with arms and legs, but it may be guided by a digital brain.” Describing a sixth grade math class at David Boody Intermediate School,  the classroom of the future  “may look like this: one room, about the size of a basketball court; more than 100 students, all plugged into a laptop; and 15 teachers and teaching assistants.”

Who’s in charge of the teachers, students, and laptops? “Beneath all of the human buzz,” the journalist said, “something other than humans is running the show: algorithms.”

Whoa! Algorithms? Yes, algorithms, those coded step-step procedures that drive Google searches, determine what is displayed on Facebook pages, and generate pop-up ads on each of our screens.

Back to the description of IS 228:

Algorithms choose which students sit together. Algorithms measure what the children know and how well they know it. They choose what problems the children should work on and provide teachers with the next lessons to teach.

Step-by-step instructions written in code, of course, is nothing new. Over a century ago, machines to generate electricity and make cars were programmed to run on instructions. Robotic machines began manufacturing scores of products in the 1960s.  A half-century later, software contains coded instructions to read X-rays, transfer millions of dollars in stock and bonds, prepare tax returns, guide driver-less cars and pilot jumbo jets across oceans. It is called automation and has added new jobs unheard of before while slicing away old familiar jobs.

In schooling, automation entered classrooms with  teaching machines in the 1950s, Scantron grading of tests in the 1970s, and software in the 1980s and 90s to help teachers take attendance, manage point systems to grade students in their classes, and communicate with students and their parents. In the last decade and a half, new software helps teachers do an incredible range of tasks from behavioral management (ClassDojo) to grading essays (Pearson WriteToLearn) (see  EdSurge for new products that they claim help teachers across K-12 grades).

The work that teachers do daily and what students experience in bricks-and-mortar buildings, however, is far from becoming thoroughly automated. Even with the hyped talk of classroom robots and predictions of schools of the future that go well beyond what occurs at David Boody Intermediate School in New York City, from kindergartens to physical education classes to Advanced Placement course remain far from automated. To fully see what happens in other sectors of society that have become far more, even dramatically, automated one has to look beyond schooling children and youth. In Part 2, I describe the extent of automation in transportation, medicine, professional, and business institutions. Part 3 will return to the question of automating classroom teaching.

16 responses to “The School of the Future: Automated Classrooms? (Part 1)”