Blaming Is So American: Cartoons

Republicans and Democrats blame one another for the impasse over reducing the deficit. Tea party rank-and-file blame President Obama for the decline of the U.S. “Occupy Wall Street” protests across the country blame inequality in wealth on the financial community’s greed. And the previous post dealt with policymakers and reformers, over the past century, blaming children, their families, teachers, and schools for doing poorly academically. Finger pointing is, well, so American.

It is now and has been for well over a century as this Thomas Nast cartoon about corrupt Tammany Hall run by Boss Tweed in late-19th century New York City points out (thanks to Ed Darrell).

In a culture where individualism is highly prized, where winners are glorified and losers are shunned, where if  problems go unsolved then it is someone’s fault–blame reigns. And so it is with a sampling from cartoons illustrating how common blaming is.

And, of course, there is the historical tic described in the last post of blaming children, teachers, and schools for low performance and anything that goes awry in the U.S. 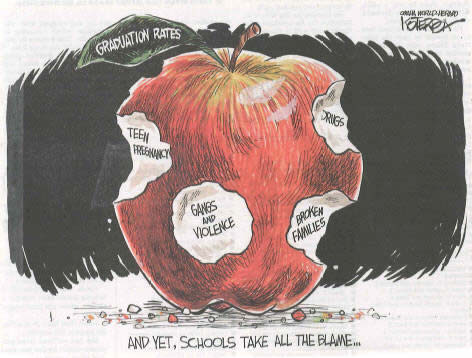 I wish I had a cartoon that shows folks blaming the turkey for the upcoming U.S. holiday of Thanksgiving, but I don’t. Here is the best that I can do.

For all of my U.S. readers, have a fine Thanksgiving. For my readers elsewhere in the world, I wish you good health and peace.

5 responses to “Blaming Is So American: Cartoons”