For a quarter-century, I have taught graduate students, teachers, principals, superintendents, and school board members about the complexity of the word “change.”

The embrace of planned change (one can substitute “reform,” “progress” or “improvement”) as an unvarnished good, particularly in public schools, is understandable in the U.S. The idea of change in of itself is highly valued in the culture and daily life (e.g., fashions, music. and automobiles get re-worked annually. Reinventing one’s self is common. Moving from one place to another is a national habit. Standing in line overnight to buy the most recent technology is unremarkable. Change is equated with moving forward to material or spiritual success (or both). Opposition to whatever planned change is proposed in a family, workplace, school, or community is often clothed in negative labels such as “resistance” or “supporting the status quo.”

Moreover, most Americans do not distinguish between different kinds of planned change such as incremental (or first-order) and fundamental (or second-order). The latter term is also called “transformational” or “radical”. Surface and deep changes do differ (see here, and here).

While getting most adults to grasp the concept of change as being highly prized in American culture is easy enough, differentiating between these kinds of planned change (and the how “change” morphs into “reform” among policymakers), is much harder. I believe that making these distinctions is crucial to understanding intentional change especially in education. I have worked hard to do so. But it has been a challenge to me as a teacher and writer.

Over the years I have used the image of a jalopy. 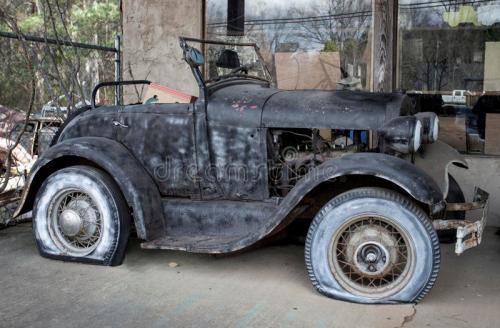 Incremental change means sanding and re-painting the old car. Getting a tune-up, new tires, and replacement car seats for the torn ones–you get the idea.

Fundamental (or transformational or radical) change, however, refers to giving up the car and getting a different kind of transportation–biking, bus or rapid transit, walking, car pooling, etc.  This metaphor for distinguishing between kinds of change was adequate but not sufficient in getting students and practitioners to not only see the differences but apply both to their organizations.

So I have constantly looked around for a better metaphor. I may have found one. An article about health care in the New York Times captures the differences between incremental and fundamental changes by using the metaphor of an old home than a jalopy.

Bear with me. Here is what a house might look like with all of the various health care plans Americans have that needs improvements (CHIP in lower left corner refers to Children Health Insurancee Program). 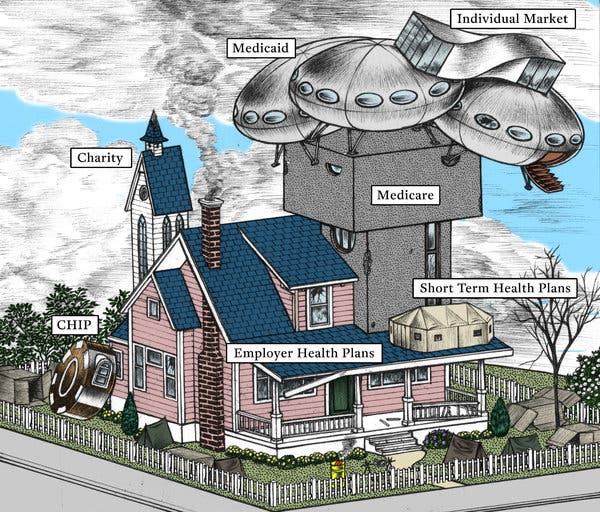 Journalist Margot Sanger-Katz, introduced the above drawing with these words:

Maybe you pass through a wardrobe and there’s a surprise bedroom on the other side, if not Narnia. Some parts are really run down. In some places, the roof is leaking or there are some other minor structural flaws. It’s also too small for everyone to live in. But even if architecturally incoherent and a bit leaky, it still works. No one would rather be homeless than live in the house.

Congressional Republicans in their strenuous efforts to end Obamacare have, as of two years ago, failed 70 times. They have no plan yet.

The current crop of Democrat candidates and leaders in Congress, however, have a raft of plans that try to re-do the above house incrementally and fundamentally. For example, Nancy Pelosi, Speaker of the House of Representatives put forth a plan that would incrementally alter the above “weird old house.” 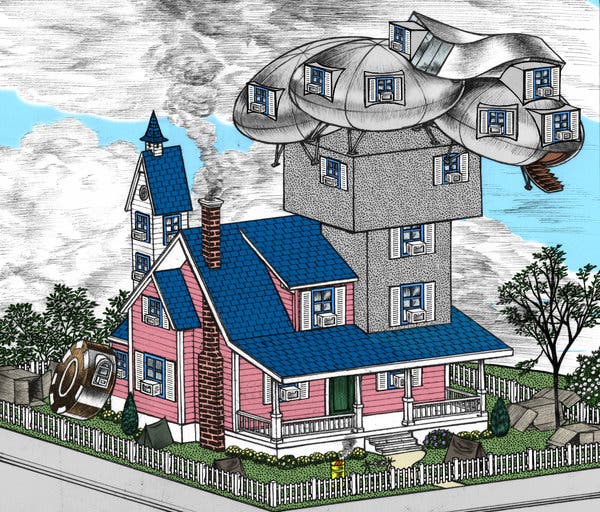 About this drawing, Sanger-Katz said:

The most limited Democratic plan, championed by House Speaker Nancy Pelosi, for example, would deal with the house’s biggest structural issues. It would lower the cost of health insurance for more people and fix some glitches in Obamacare’s design — the home construction equivalent of patching the roof, fixing a saggy porch and repainting. Residents could remain in the house while such minor repairs took place. These changes would not cost a ton of money. The house would still be weird. There would still be some people without a place to live.

Then there is the plan that former Vice-President has set forth that does more than Pelosi’s to the house. 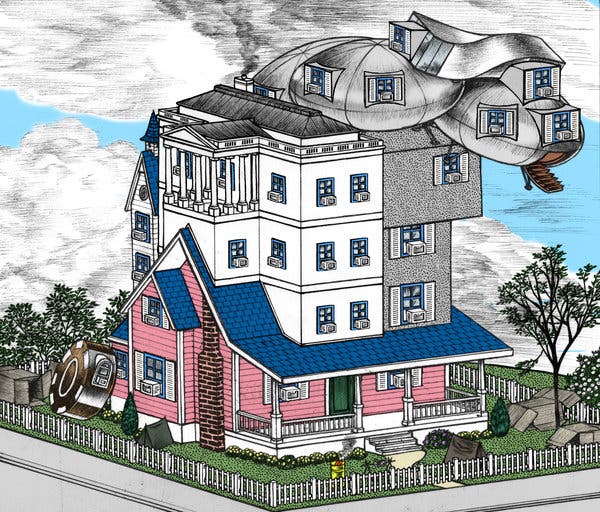 Mr. Biden, too, would patch the roof and upgrade the windows. But he’d also put on a big new wing: an expansion of the Medicare program that would allow more people to join, sometimes called a public option. Everyone living in the house can stay while the renovations take place, though there might be disruptions. It would cost more, more homeless people would now fit in, and some living in the weirder wings might move into the new addition. People would pay for housing through a mixture of taxes and rent.

All of the above are incremental changes. re-painting, fixing the porch, adding here and there, the house is certainly improved. But the renovated house is still recognizable albeit in far better shape than it was.

Then there are the health insurance plans–Medicare for All–proposed by U.S. Senators Bernie Sanders and Elizabeth Warren. The drawing is different now since these plans propose fundamental changes. 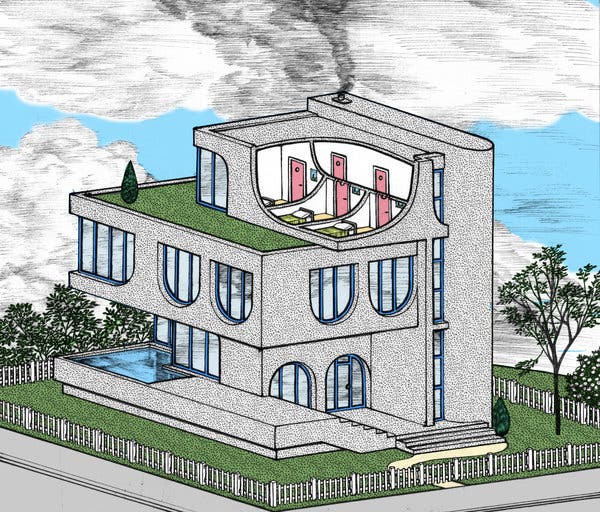 Sanger-Katz described this plan (Senator Kamala Harris’s plan is a variation of this) as follows:

Bernie Sanders wants to tear down the weird old house entirely and build his dream home. It would be enormous and feature many wonderful amenities. When done, there would be no homeless people at all, and everyone’s bedrooms would look exactly the same. The weirdness would be gone. But the entire old house would be gone, too, which some people might miss, and there could be unanticipated cost overruns in the construction. Some people might not enjoy the aesthetics of a modernist villa. While no one would have to pay rent in exchange for housing there, most people would have to pay more in taxes so the government could maintain the property.

This would be a fundamental change, no more a “weird old house” but a completely transformed one.

OK, what do you think of the “weird old house” metaphor as compared to the jalopy in explaining incremental and fundamental changes in schooling?

10 responses to “Metaphors for School Change”