A friend and former colleague, Henry Levin, recently wrote about his experience in a 1940s classroom.

I started school in 1943, and by the time we were in third grade we were introduced to writing cursive using an ink pen.  Initially these were the pens with long tapered wooden handles with replaceable pen tips or nibs, but by sixth grade we were expected to use fountain pens because they were less messy.  I remember filling carefully my pen by maneuvering a lever on its side that compressed a rubber bladder inside to draw ink from the inkwell on its release. 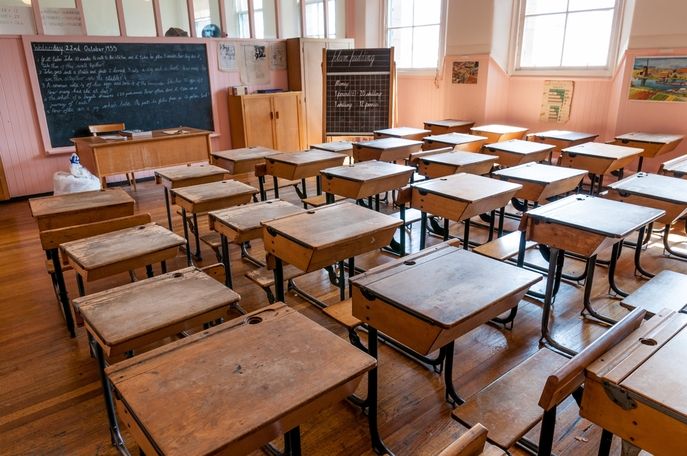 I was also given the responsibility of refilling the inkwells each day or every other day.  We used huge bottles of Quink (perhaps a liter), and they had to be manipulated in just the right way to fill (three quarters), but not overfill the inkwell.  My recollection is that this was a permanent ink that could not be removed from my clothing.  Once I dropped the entire bottle on the floor, leading to a large spill.  That required initially placing newsprint and paper tissues to soak up most of it, followed by a mopping and scrubbing with water and suds.  Still, a shadow of the ink remained, and the teacher reminded me periodically that I needed to be careful not to further damage her floor.  Towards the end of high school some very expensive ballpoint pens began to replace the ink pens, and we were no longer expected to use the ink paraphernalia.But, the old desks last for a long time.  Even in the late fifties (I was in college), I visited my old high school and found that all of the student desks still had inkwells.  Students wondered what they were for.

I also have a memory of a later technology that, like the inkwell, became obsolescent.

In the late 1960s Stanford University administrators secured federal funds to build a multi-million dollar facility called the Stanford Center for Research, Development, and Teaching (SCRDT). A fully furnished television studio with “state-of-the-art” cameras, videotape recorders, and monitors occupied the main floor with the star-in-the-crown of the new building located in the Large-Group Instruction room (LGI).

The amphitheater-shaped room with half-circular rows looked down on a small stage with a lectern, a massive pull-down screen, and 2 large monitors suspended from the ceiling. At most of the individual seats was a small punch-button pad called the “student responder.” The responder contained the numbers 1-10 and letters T and F.

At the very top of the amphitheater was a glass-enclosed technician’s station where an aide could assist the professor with amplification of sound, simultaneous interpretation of various languages, show slides or films, and put on monitors data that the professors wanted.  Administrators had designed the room for professors to enhance the delivery of lectures.

For lectures, the student responder came into play. Designers created the pad for students to punch in their choices to communicate instantaneously to the lecturer their answers to the professor’s questions, such as “If you agree, press 1, disagree, press 2.” “If statement is true, press T.”  As students pressed the keypad, the data went directly to a mainframe computer where the students’ responses were immediately assembled and displayed for the professor at a console on the lectern. The lecturer was then able to adjust the pace and content of the lecture to this advanced interactive technology, circa 1970, that linked students to teacher.

By 1972 when I came to Stanford as a graduate student, the LGI was being used as a large lecture hall for classes from other departments. The now-disconnected keypads were toys that bored students played with during lectures. The pull-down screen was used for overheads and occasional films. The fixed position cameras purchased in the late 1960s were already beyond repair and obsolete.

In 1981, when I returned to teach at Stanford, the SCRDT had been renamed the Center for Educational Research at Stanford (CERAS). In the LGI, none of the original equipment or technology (except the sound system and simultaneous translation) was used by either students or professors. The student responders, however, were still there.

By 2011, nearly a half-century after the SCRDT installed the LGI, the amphitheater room was still in use as a regular lecture hall. I was in that room that year to hear a colleague talk about his career in education and, you guessed it, as I listened, my fingers crept over to the “student responder” and I began to click the keys.

In 2012, the LGI was renovated and the numeric pads disappeared just as those holes in classroom desks to store ink did decades ago.*

*Thanks to Deborah Belanger for supplying the date of the LGI renovation.

10 responses to “Changing Technologies in Classrooms”