From Francis Parker to John Dewey to Ella Flagg Young, to Vito Perrone to Deborah Meier to Theodore Sizer, complaints about the “old classroom model” have echoed through university lecture halls, academic monographs, oodles of conferences and, now, in education blogs. Criticism of existing public schools has spawned generation after generation of reformers looking for ways to alter the dominant “factory model,” “assembly line,” or “batch processing” way of schooling over the past 150 years.

Their target has been the historic structure of the age-graded public school with its  buildings divided into hallways lined with box-like classrooms where teachers distribute slices of curriculum grade-by-grade using whole and small-group instruction, homework, tests daily. The regime ends in June with either students being promoted to the next grade or being retained in the grade for another year.

Imported from Prussia in the late 1840s, that generation of reformers touted it as an innovation that was superior to the one-room schoolhouse. And it was. Between the mid-19th and early 20th centuries, the age-graded public school took in millions of immigrants from western, eastern, and southern Europe. These immigrants became Americanized through schooling and the workplace.

But there were critics of the age-graded school then and now. In 1902, John Dewey warned educators that “the manner in which the machinery of instruction bears upon the child … really controls the whole system.” That “machinery of instruction” is what David Tyack and I called the “grammar of schooling” in Tinkering toward Utopia.

So Salman Khan joins a queue of reformers targeting the “old classroom model” in starting a brand new school unlike traditional public schools. There is a direct line from John Dewey’s Lab School (1896-1904) to progressive public and private schools in the 1920s to small “free” schools popping up in the mid-1960s, the small schools movement in the 1990s and now currently micro-schools gussied up with new technologies . The lineage is anchored in the quest to create settings where students learn from one another regardless of age, pursue their intellectual curiosity and passions at their pace, and where knowledgeable and skilled teachers  guide students to reach their individual potential.

Consider micro-schools. The one-room schoolhouse of yesteryear is the model for micro-schools. Small—anywhere from 25 to 150 students of mixed ages–with a few teachers committed to integrated content and skills such as multi-subject projects on climate change, answering big questions on why countries go to war, producing a newspaper, and connecting daily to the world outside of the school. Learning is active occurring in small groups and independent (a.k.a. “personalized learning”).

Dispensing with grade levels, traditional pedagogy, tests geared to state curriculum standards, and using space and furniture differently than in regular schools. Micro-schools vary in their origin–public (charters, school-within-a-school to free standing ones) and private. Most, however, are largely private and charge tuition in the tens of thousands dollars (see here, here, and here).  They also vary in their challenge to the “grammar of schooling” ranging from individually paced mastery-based learning to wholly project-based and experiential programs–some schools even combining these features.

New York and San Francisco-based Alt/Schools, for example, are privately-funded micro-schools that charge tuition and create schools with different systems unlike those found in nearly all public schools. No “machinery of instruction” in Alt/Schools (see here, here, and here). The policy Nirvana of “going to scale,” that is, creating more Alt/Schools and lowering the cost of schooling per student, however, has stumbled.

Is the Khan Lab School also a micro-school? Yes it is.

KLS is a Lab School in the tradition of challenging the dominant “grammar of instruction” in public schools going back to the first one operated by John Dewey (and later wife, Alice) at the University of Chicago at the beginning of the 20th century. 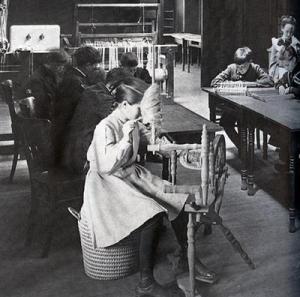 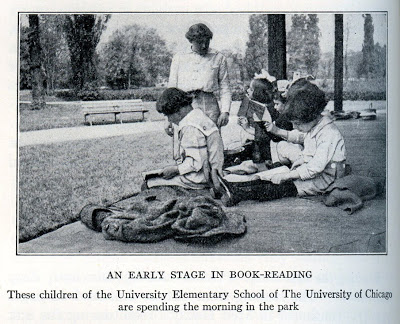 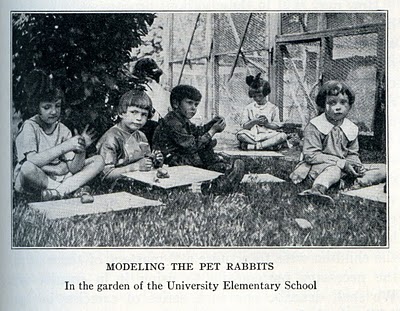 The Dewey Lab School was committed to active, social, and individualized learning–all without laptops and tablets.  Organizing the school day into group and individual projects located inside and outside the rooms of the school under the guidance of teachers, John and Alice Dewey believed that education needed to balance children’s interests with disciplinary knowledge. Such an education was instrumental to building a strong democracy and would lead to positive societal change. Highly touted at the time as the premier challenge to traditional public schooling, conflicts between the University’s leadership and the Deweys led to their departure in 1904 (see here and here)

While KLS is not affiliated with any university as was Dewey’s Laboratory School–it is an extension of private, non-profit Khan Academy–KLS remains committed to both “research-based instruction and furthering innovation in education” and, at the same time, putting into practice the ideas of its founder.

The tradition of challenging the dominant structure of the age-graded school and its “grammar of schooling” continues to this day with micro-schools in Silicon Valley and elsewhere illustrating anew that such reforms to the traditional “machinery of instruction” have resided, for the most part, in private schools where tuition runs high and students bring many economic and social advantages school. In a profound way, the high cost of these private schools and the resources available to their founders in experienced teachers, aides, technologies, space, and materials show clearly the prior conditions necessary not only to operate such schools in public venues but also what is needed to contest the prevailing “grammar of schooling.”

Filed under how teachers teach, Reforming schools, technology use