Whatever Happened To Values Clarification?

In the mid-1960s, prompted by a bestselling book among educators, a classroom approach called “Values Clarification” spread swiftly among elementary and secondary school teachers. The thrust of the approach was to have students use texts and new instructional materials to identify their  values and reflect on them in discussion, writing, and small group work where the values often came into conflict. In effect, help students work through their positions on such values as loyalty, truth, trust, lying, etc.

Where Did the Idea Originate?

Louis Raths, a professor at New York University in the mid-1950s, working with John Dewey’s ideas about the importance of values in education, developed for his classes materials and teaching strategies that got his students to think about what they prized in life. He, Sidney, Simon, and Merrill Harmin published Values and Teaching: Working with Values in Classrooms in 1966. The book went through subsequent editions and became a staple in university teacher education programs and innovative urban schools. For example, I used it in the late-1960s in training former Peace Corps returnees to become social studies teachers in a Washington, D.C. high school.

As one of proselytizers for the teaching strategy, Howard Kirshenbaum said:

Values clarification was arguably the most widespread of the innovative approaches to values and
moral education that were popular during this period.
Kirshenbaum said “arguably.” Like many other teaching strategies, tracking how many teachers,
schools, and districts adopted  and then implemented it is impossible to nail down. In 1972, one of
the authors of the best selling book on the topic could only list a few schools that adopted
it, but talk, oh so much talk, about the strategy flooded educational publications, staff rooms,
and educator conferences. Moreover Values Clarification as a teaching approach was squirmy
since it varied classroom to classroom as teachers adapted it to the contours of their students.
Nonetheless, among many teachers and administrators throughout the 1970s, the talk and
adoption of the teaching strategy was widespread.

What is Values Clarification?

Here is an exercise that teachers in a junior high school used in their classes in the early 1970s,
according to the principal of the school:

A. You are on a Congressional Committee in Washington. D.C. $10 million has been given for three

worthy causes. Which would you do first, second, third?

You must spend all the money on one thing:Clean up rivers, garbage, sewage, and pollution.

B. Which would you find hardest to do?

The above exercise is typical of what many teachers embracing Values Clarification would use.

to do in using the approach.

In using this strategy, teachers must:

*Respect student’s right to participate or not;

*Encourage each student to answer honestly;

*Ask both personal and social questions.

Values Clarification avoids instilling values in students; the approach seeks to have students
examine the values they already have. 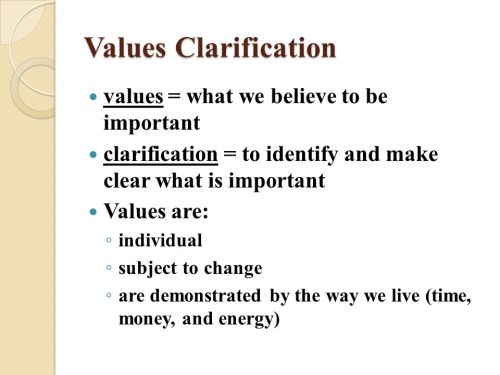 What Problem Did Values Clarification Intend to Solve?

Emotional needs of young children and youth seldom get dealt with in public schools–what students prize, honor, and feel strongly about. It is those values embedded in emotions, feelings, and ideas that lay behind the choices that students make in and out of school. In most classrooms such clarifying discussions never arise and the value-choices get swallowed by both teachers and students.

Content and skills dominate classroom lessons and value-laden choices they have to make in life (e.g., take drugs, have sex, report law-breakers to authorities, lie to parents) are absent. Such discussions, such clarification of choices students make, need–champions said–to find a place in academic subjects in elementary and secondary schools.

What Happened to Values Clarification?

The short answer is that it disappeared from the vocabulary of school reformers and teachers by the early 1980s. Poof, gone. Few mentioned the phrase a decade later.

But if the phrase disappeared, some proponents of Values Clarification migrated to an old stand-by in public schools for the past two centuries:  “character education.” Character education (see here and here) has existed in U.S. public schools off and on for the simple reason that tax-supported  schooling was always expected to strengthen personal character and the community (e.g., love of country, help neighbors, do the right thing for yourself and family). Schools, advocates for character education said, instill the correct values. Clarifying values can shake the core values children and youth bring from home.

Formal programs of character education have entered and exited public schools. Since the 1980s, Character Education has spread across elementary and secondary schools in urban, suburban, and rural schools (see here and here). 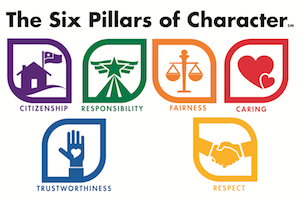 17 responses to “Whatever Happened To Values Clarification?”