As more states and districts require courses in computer science for high school graduation and the teaching of coding in elementary school, they will rediscover what previous generations of school reformers have learned. Moving from adopted policy to alter what and how teachers teach is no cinch. Neither is it–pick your cliche–“a piece of cake,” “a walk in the park,” “shooting fish in a barrel,”” nor “taking candy away from a baby.”

Contrary to the above cliches, policies aimed at changing classroom practice, such as curricular reforms have persistently run into problems that  have plagued ardent reformers. The lessons that have to be learned time and again from earlier generations of school reformers are straightforward.

*Build teacher capabilities in content and skills since both determine to what degree, if any, a policy gets past the classroom door.

*With or without enhanced capabilities and expertise, teachers will adapt policies aimed at altering how and what they teach to the contours of the classrooms in which they teach. If policymakers hate teacher fingerprints over innovations, if they seek fidelity in putting desired reforms into practice, they wish for the impossible.

*Ignoring both of the above lessons ends up with incomplete implementation of desired policies and sorely disappointed school reformers.

Examples of these lessons are legion. Consider the new curricula that reform-inspired academic specialists, funded by the federal government, sought for all U.S. teachers a half-century ago. Aimed at revolutionizing teaching and learning in math, science, and social studies (spurred in part by a popular perception that Soviet education was superior to American schools), millions of dollars went into producing textbooks, developing classroom materials, and training teachers to use inquiry and discovery lessons to engage students in asking questions, solve problems, and use thinking skills. Using the best instructional materials that scholars could produce, teachers taught students how scientists experimented, mathematicians solved math problems and historians used primary sources to understand the past. Published materials ended up in the hands of teachers who, for the most part, had had little time to understand what was demanded by the novel materials or, for that matter, how to use them in lessons.

By the end of the 1970s, education researchers were reporting that instead of student involvement in critical thinking, problem solving, or experiencing how scientists worked, they had found the familiar teacher-centered instruction aimed at imparting knowledge from a text. There was, however, a distinct curricular residue of these federally funded efforts left in the textbooks published in the 1970s. The attempt to revolutionize teaching and learning evolved, in time, into new textbook content (see here and here). Reformers were deeply disappointed in the small returns from major efforts.

The experience of Logo

Another example of reformers ignoring the above lessons was introducing a voluntary program of coding into schools in the 1970s.  Logo illustrates the core dynamic at work in schools and classrooms when policies aimed at changing what and how teachers teach get put into practice.

The brainchild of Seymour Papert (who had worked with Swiss developmental psychologist Jean Piaget) and a team at the Massachusetts Institute of Technology (MIT), Logo had children using programming language to command a robotic “turtle” on a computer screen. Beginning in the early 1970s, the MIT team sought to teach young children how to construct and solve problems, learn geometric concepts, and bring creativity back into the classroom. The designers saw Logo as a student-centered, progressive innovation that would transform teaching, learning, and the institution of schooling.

Launched in a Brookline (MA) elementary school and with the subsequent publication of Papert’s Mindstorms (1980), Logo and its “turtle” swept across many schools (and homes) here and abroad.

From Mindstorms, Papert made clear the intent and dream of Logo in schools. 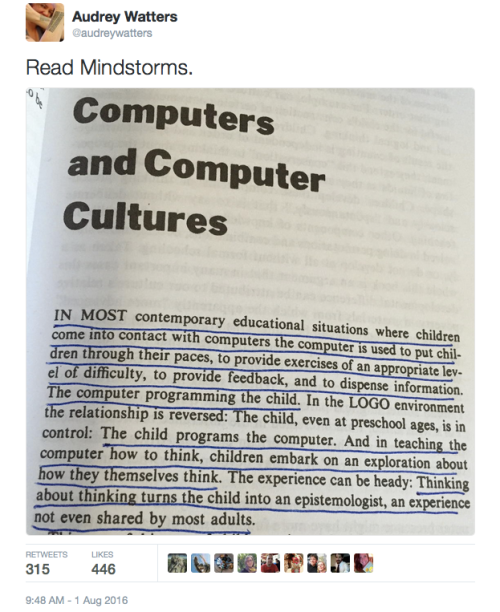 For Logo activists, however, their timing was bad. The idealistic and experimental years in public schools during the mid-1960s to mid-1970s was already ebbing as reformers began piloting Logo in a few elementary schools. In a few years, A “back to basics” reform had seized civic and political leaders and the window for new ventures such as Logo, anchored in the work of Jean Piaget and John Dewey, had closed. Traditional forms of schooling and teaching were back in vogue. Logo became a boutique offering. As always, context matters when it comes to reform.

In the wake of the Nation at Risk report (1983) warning leaders that unless schools became more effective the U.S. would languish economically, teaching young children to program a turtle scuttling across a screen was out of sync with another generation of reform-driven policies.

By the late-1980s, states had raised their graduation standards, created more demanding curriculum frameworks, and began testing regimes. In a few years, traditional age-graded schools adapted to the changing national context in both curriculum and instruction. In the midst of these changes, Papert had come to see schools as places where the “grammar of schooling” was inherently hostile to the ways that students should learn concepts and skills (see here, here, and here).

Times change. Now the climate of rabid acceptance for anything smelling of high-tech, computer science, and new devices has so permeated the culture, learning to code in schools is one whose time has come.  Given the history of new curricula and  Logo and how they were implemented suggest to me that the those backing the current vendor and donor-driven passion for coding and computer science courses in schools need to consider those often ignored lessons I described above and the  concept of “mutual adaptation,” the historical process by which policies get put into practice in U.S. schools. Part 3 of these posts take up mutual adaptation of classroom reforms.