Taking pills and sprays to remedy illness is ubiquitous in the U.S.  Ah, if there were only such quick cure-alls for lousy teaching. Say, like aerosol cans that can spray “good” teaching into a classroom.

Or maybe principals can ship cans of breakfast food to certain teachers’ homes. 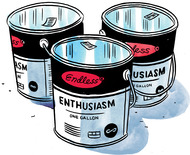 Contrary to this magical thinking, first-rate teaching takes a lot of smarts, time, energy, and determination, not sprays or cans. In this post, I will describe one example of what I consider “good” teaching based on my recent observation of the teacher and his class in a history lesson in a minority-dominated high school on the East coast.**

Burt Taylor* is completing his fifth year as a world history teacher at Charlotte Forten High School (CFHS). After graduating college, he served in the U.S. Army for over three years. While serving in Afghanistan, his mother sent him Frank McCourt’s Teacher Man and urged him to consider teaching after he left the service. He did. In 2007, He joined Teach for America. After his five weeks of training in Philadelphia (which he found of little use in his first year as a teacher), he was sent to a large Eastern urban school district. He began teaching world history there in 2009.

While he did not major in history as an undergraduate, he does have (and did enjoy) a “passion for reading and studying history since I was a kid.” The African American and Latino high school students he faces for 80- and 90-minute courses four times a day, while coming to school with “many challenges,” has made teaching at CFHS “rewarding.”

Finishing his fifth year, Taylor remembers well the turmoil in the school since he began teaching. The turmoil, however, came not from students but from the district office. Because of persistent low test-scores on standardized tests, poor attendance, high numbers of dropouts, and a graduation rate of just over 50 percent, district administrators “restructured” CFHS twice, meaning that the first “restructuring” didn’t work and meaning that Taylor had to reapply to teach history each time and a new principal had to decide whether to hire him.

I observed Taylor’s world history class for 70 minutes and interviewed him afterwards. In the class of 25 who are enrolled, 15 were present sitting at pods of three desks clustered around the spacious room. Student were 10th and 11th graders, many of whom had failed the course in the previous year. The lesson I observed, student attendance for that class, materials Taylor used, and participation were, in his word, “typical” of other classes he has taught.

The materials Taylor used was drawn from a pool of lessons available online from the project “Reading Like a Historian.” He has used other lessons offered by the Stanford History Education Group. I asked: how did he come to this website? From district or school professional development? From a fellow teacher? No, he said. He had stumbled over the website, liked it for the focus on concepts and the work of historians, and ended up adapting lessons to his classroom.

The lesson I observed was the “Invasion of Nanking.” Basically, Taylor used the source material–photos, one excerpt from a Japanese textbook and one from a Chinese text on the invasion and then a final selection from an eminent historian of Chinese history on what happened in the city in 1937–to get across the idea that textbooks are biased, have points of view and, like a detective, it is critical to figure out the perspective buried in the text.

On the whiteboard in front of room, Taylor had listed each activity the class would do with times allotted for each one. An alarm on his desk would ding to end activity. Here’s how Taylor unfolded the lesson on the invasion of Nanking.

+ For the “warm-up” activity as students entered the class and settled into their seats,  Taylor had a photo with no caption on his “smart board” with questions for the students to answer about the photo (“List what you see in photo. What questions do you have? What conclusions do you have?”).

+He walked around the room to see what students were writing and marked each student’s “Daily Participation Grade” sheet which they had picked up on entering room. The sheet has a section set aside for “Warm Up” and two boxes for teacher to mark: “Partial” and “Good To Go.”

+Teacher then compiled on “smart board” what students have written down about the photo. He called on students by name and a few raised their hands (no questions to entire group with choral responses from students). From clues in the photo, students realized that it showed a post-battle scene in an Asian city many years ago.

+Taylor then told students that the scene in the photo occurred in Nanking in 1937 after the Japanese invaded China. “We are,” he said to class, “going to figure out what happened in Nanking in that year.” In a mini-lecture–he asked students to take notes–he gave them the background of the invasion and what happened in the 1930s in Japan. Of the 15 in class, 13 were writing as Taylor lectured for about ten minutes. He then told the class that they will read two different paragraphs from textbooks about the same event–the invasion of Nanking–and challenged them to detect which description came from a Japanese text and which from a Chinese text.

+To insure that students knew the geography of the photo and sources, he had them go to a shelf holding a classroom set of world history texts and turn to page 594 to see map of Japan, China, and region. He asked questions about location of countries. He then told class that he will ask a “trick question” about the photo and the excerpts from the texts. So they “should pay attention” to what he says and what they read.

+Each three-person pod was a small group made up of a “reader,” “materials manager,” and “discussion leader.” He called on “material managers” to come up to desk and get textbook excerpts. They did. Taylor then instructed “readers” to read aloud to their group each excerpt, labeled A and B. For words students did not know, they were to underline them and try to figure out what they mean. The “reader” in the group near me stumbled on the word “atrocity” and was discussing it when Taylor, carrying a clipboard to assess each student’s participation, came by.

+Afterwards, he asked each group to decide whether A and B were from either a Japanese or Chinese text. “Discussion leaders” in each group worked to get agreement about texts–one group was excited enough to give each other fist bumps on completing their choices.

+Taylor then recorded the student votes for text A coming from a Japanese text (8) and (7) voted for B excerpted from Chinese text. He then asked individual students to give their reasons why they voted as they did using the text for evidence supporting their answer. After the back-and-forth of this discussion, Taylor offered the students another chance to vote and many crossed over from their original vote, agreeing that A came from a Japanese textbook.

+The teacher then asked: “Which of these two textbook accounts do you trust?” Students raised hands and Taylor also called on students who had not participated in whole-group discussion. Students largely agreed that you cannot trust either one because each side wanted to portray the Nanking invasion as either common in wartime or that it was a massacre. When the teacher asked what they had learned so far, many responded with variations of: there are at least two sides to listen to when something occurs; you cannot believe that textbooks tell the “truth” of the past.

+Then, Taylor called for “materials managers” to come up to desk to get a final excerpt written by a historian of Chinese history. They did. “Readers” sprang into action, and the “discussion leaders” led exchanges in the group to determine what the historian contributed to their earlier decision on Text A and B. For the 10 minutes of this final activity, Taylor, carrying his clipboard, listened in to each group, asked and answer student queries, and jotted down notes.

+Finally, Taylor asked students what they learned from reading the historian’s account and Text A and B. Answers varied a great deal from those who raised their hands to reply. The teacher also called on a few students who did not raise their hands. Students felt that the historian’s view of the invasion of Nanking was most accurate because the historian used Chinese, Japanese, and non-Asian sources who were there at the time. Taylor nodded his head and said the historian “corroborated” his account of what happened with other sources, an essential in writing about the past.

I had to leave the room to observe another teacher as Taylor was winding down the lesson.

I felt that Taylor demonstrated much planning, extraordinary management of the material and class organization, and was constantly assessing what students were doing and their level of understanding of the questions and tasks he had assigned. For me, this lesson was stellar.

Note to Readers: Burt Taylor told me in a subsequent phone interview that he would be leaving CFHS in June to  take a position in a federal agency. When I asked him whether he plans to return to teaching history at CFHS or any high school, he said, he probably would not.

*I promised confidentiality to teachers in this study so individual and school names in post are pseudonyms.

**Note carefully that this instance of “good” teaching is a hybrid of teacher-centered and student-centered traditions in instruction(see here). Note further that I will not determine whether the teacher is successful (see Part 1).