Schools as Factories: Metaphors That Stick

You have seen images like these time and again: 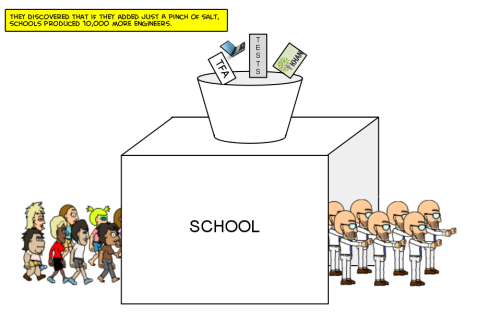 The idea of the school as an efficient factory assembly line has a long but surprising history. A century ago, the notion of schools delivering finished products to a democratic society was both new and admired. Here is what Professor Ellwood P. Cubberley, of Stanford University said in the early 20th century:

Our schools are, in a sense, factories, in which the raw products (children) are to be shaped and fashioned into products to meet the various demands of life. The specifications for manufacturing come from the demands of twentieth-century civilization, and it is the business of the school to build its pupils according to the specifications laid down.

In the midst of the progressive-inspired school efficiency movement, sparked by “scientific management,” Cubberley captured the prevailing beliefs of most school reformers then. Critics of the day, such as John Dewey, did question this efficiency-driven mindset that dominated schools then arguing that the purpose of public schooling in a democracy goes beyond preparation for the workplace. But their voices were drowned out by champions of uniformity, productivity, and more bang for each dollar spent  in every aspect of schooling.

Within a half-century, however, the affection for the metaphor of school-as-factory shifted 180 degrees and reformers of a later generation turned the image into an indictment. Standardization, efficiency, and up-close connections to the economy–the values earlier reformers applauded–became epithets hurled by self-styled progressive school reformers of a subsequent generation. So  recent images represent students and teachers as cogs in a constantly whirring machine: 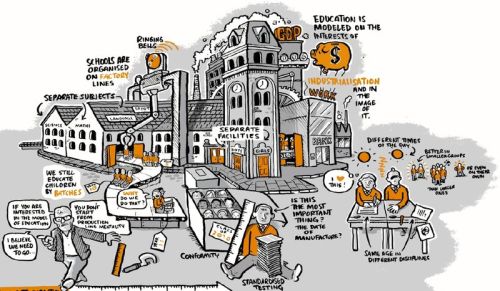 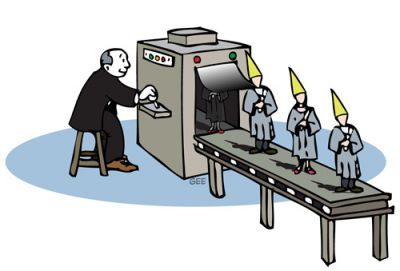 Of course, schools-as-factories is only one of the many metaphors for schooling used since the onset of tax-supported public schools. Philip Schlechty and Ann Joslin, for example, wrote three decades ago about different images that have been used by both advocates and critics of what schools should be doing:

All of these have a history and were used by both reformers and their opponents. Embraced by different sides of the school reform spectrum at two different moments in time, competing metaphors, like those above, lagged behind or seldom appeared in policy proposals advanced by reformers. The one metaphor that has persisted over the 20th century outstripping the others has been the image of the school-as-a-factory even with its shifting positive to negative connotations.

The metaphor serves the interests of both contemporary advocates and critics of standardized curriculum and instruction. Of course, current advocates avoid the vocabulary of assembly line and factory made products. They–yes there are some advocates who even use the phrase schools-as-factories (see here)–talk about the need for schools to be efficiently run (principals and superintendents as managers and CEOs), effectively producing better test scores on international tests than European and Asian competitors, being held accountable for what students achieve and what classroom teachers do, and, most important, cranking out graduates ready to enter the labor market fully equipped with the necessary skills and knowledge. Advocates want schools to build human capital, especially in urban districts, and link those schools to a growing economy.

Critics of the metaphor, however, look at curricular and instructional standardization, ubiquitous testing, and coercive accountability as harming both students and teachers. This cartoon says it all.

The sharp increase in snarky cartoons and irritable comments on Common Core standards and pervasive standardized testing from both the political left and right, I believe, stems from the century-old disputes over what purposes schools serve in a capitalist democracy. This age-old question is seldom openly debated and too often has been lost in the rhetoric and metaphors used by reformers over the past century.

And that, I believe, is the reason why schools-as-factories has stuck as an image used in reformer squabbles over the generations.

58 responses to “Schools as Factories: Metaphors That Stick”