The Sham and Shame of “Best Practices”

I posted this February 3, 2010. I have since made some changes in the post. Given the adoption of Common Core Standards in 45 states and the District of Columbia and the current emphasis on putting the standards into practice across thousands of districts, I felt that the phrase “best practices” needed another public scrubbing.

In medical practice, evidenced-based “best practices” have led the way t0 improved health care in the U.S., according to its champions. In the federal stimulus legislation, over a billion dollars was devoted to determining “what works and doesn’t” (President Obama’s words) in diagnosing and treating patients. Now that is serious money for a serious cause.

In education, “best practices” are continually laid out by policymakers, researchers, and media journalists as guides for school boards, superintendents, and teachers to follow in improving student test scores and building better schools. Recent reports lay out “best practices” on classroom management, professional development, and school working conditions that “can revamp classrooms and schools to close the achievement gaps and promote excellence in learning for all students.” For the federal “Race To The Top,” the U.S. Secretary of Education laid out four models of turning around chronically low performing schools. These models were drawn from “best practices” for rescuing failing schools, even though some were contested.

Where does phrase “best practices” originate? Its origin seems to be in the business sector with management consultants. It has become a buzzword across governmental, educational, and medical organizations. In becoming popular, the phrase has drifted away linguistically from its original meaning of effective practices in accomplishing goals to mean faddish or trendy activities.

Even in medicine. Jerome Groopman recently reported startling reversals in “best practices.” Based upon rigorous studies, an expert panel of medical researchers recommended to Medicare, for example, that it was a “best practice” to control blood sugar levels for very sick patients. “That measure of quality, ” Groopman said, “was not only shown to be wrong [by subsequent studies] but resulted in a higher likelihood of death when compared to measures allowing a more flexible treatment and higher blood sugar.” Groopman listed reversal after reversal of Medicare approved “best practices” for treating kidney disease, pneumonia, congestive heart disease, and other conditions. Need I mention the “best” age for women to have mammograms?

According to Groopman, experts who recommended “best practice” treatments (and their advice became Medicare mandates to all physicians) “did not distinguish between medical practices that can be standardized and not significantly altered by the condition of the individual patient, and those that must be adapted to a particular person.” He gives the example of putting a catheter into a blood vessel, a procedure that involves the same steps for every patient to avoid infection. This “one-size-fits-all” mechanical procedure differs from prescribing a “best practice” for a complex disease such as diabetes, congestive heart failure, or breast cancer. Not making this critical distinction leads experts to overreach in their recommendations to practitioners and, in time, turn a “best practice” such as hormone replacement therapy for women into a fad. A similar situation plagues school reform.

In reforming schools, except in particular narrow instances of practice–the use of phonics to teach young children to decode words–few expert panels (e.g., the National Research Council report on reading in 1998) sift the available evidence drawn from rigorous studies to recommend standardized practices. Since there is no Medicare agency in U.S. schools to prescribe “best practice,” appointed blue-ribbon commissions, responding to a national problem (e.g., the Cold War space race, poverty, global economic competition) advise policymakers on standard practices–think Nation at Risk report in 1983–that should be used to improve schooling. 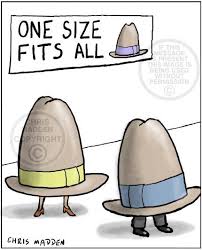 The distinction Groopman made that medical experts failed to sort out practices that can be standardized on all patients from those that must be adapted to a particular person has had little traction in the world of reform-minded policymakers eager to put into place, for example, the latest technology. Prestigious educational panels, issue reports, some anchored in research but most collections of practices that seemingly are successful with some students, some teachers, in some places. These panels then advise policymakers to standardize these seemingly successful practices on all schools.

I am not the first educator, nor the last, to make the point that school reform is a value-driven (not research-driven) business where policymakers depend far more on faith than facts and far more on uniformity than context.

In comparing “best practices” in medicine and education, I now see more clearly how (and why) state and federal policymakers, grasping for anything that looks like success, spread faddish and unexamined reforms. This is both a sham and a shame.

18 responses to “The Sham and Shame of “Best Practices””