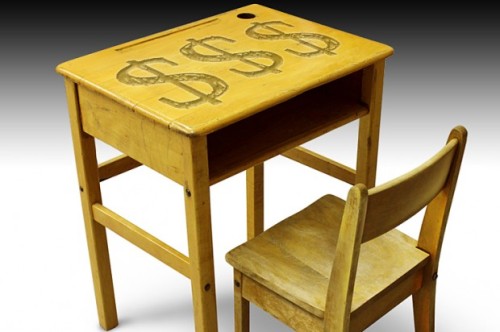 For all of the three-decade hype about how business practices applied to K-12 schools will make them more efficient and high performing, a short hop and skip through the past half-century of for-profit companies failing in the education market might illustrate how applying market-driven practices to improve schools and make money  at the same time is hard to do for even the shrewdish of entrepreneurs.

In 1969, Behavioral Research Laboratory, contracted with the largely black Gary (IN) district to raise test scores in reading and math in the Banneker elementary school. They failed. BRL is no more.

Dorsett Educational Systems in 1970-1971 took over a school in Texarkana (AR) contracting to raise 350 children one grade level in reading and math after 80 hours of instruction. They failed. DES is no more.

In 1970, Westinghouse Learning Systems contracted with Gilroy (CA) to take over the Eliot elementary school to raise test scores in reading and math. They failed. WLS is no more.

I could give many more examples of for-profit corporations seeking to make money from operating schools  through performance contracting when districts were flush with federal funds from the Elementary and Secondary Education Act  in the late-1960s and early 1970s–but I won’t. Failure in doing what seemed to be a fairly straightforward job–raise student test scores–proved undo-able by some of the best and brightest business leaders of the day.

These corporations tripped badly and, either then or soon after, went belly up or were swallowed by larger corporations.  In the late-1960s and early 1970s, the education market was ripe for money-making ventures to raise students’ low test scores but even then the school market proved unforgiving for those who believed that there were easy profits to be made by simply applying business principles of efficiency and effectiveness to teaching and learning.

CEOs and investors learned the hard way that what worked in companies to make  silicon chips, crank out case after case of soda, and create brand-new cereals flopped when managers tried to turn low-performing students around and get higher test scores.

That was then. What about the recent past when start-ups, media conglomerates, and high-tech companies compete for the education dollar? The education market has gotten larger since the 1990s with charter schools, vouchers, and portfolios of alternative school in urban districts. Moreover, with Race to the Top and No Child Left Behind monies, there are profits to be made. Nonetheless, corporate failures have  piled up.

Consider Minnesota-based Education Alternatives Inc. a fast rising star in the for-profit sector in the early 1990s. They managed schools in Hartford (CT) and nine Baltimore (MD) schools under a $133 million contract. EAI filed for bankruptcy in 2001.

How about Edison Inc.? Entrepreneur Chris Whittle, founder of Channel 1–a for-profit venture in public schools that eventually nose-dived–founded the Edison project in 1992. He and his partners believed that they could get students to learn more and better than regular public school could and, at the same time, return a tidy profit to investors. Edison Inc. was the first for-profit school-management company to be traded on a stock exchange. They got contracts from urban school districts (e.g., Wichita, KN; Philadelphia, PA, Ravenswood, CA) to manage scores of schools but stumbled into one political difficulty after another  with unions, parents, and administrators (see here and here). Their stock had reached a high of $40 a share in 2001 and then, as problems piled up, dipped to 14 cents later in the same year. Dissatisfied with Edison, districts began canceling contracts for financial, political, and managerial reasons. By 2005,  they were still 153 schools for over 65,000 students but the company was already dumping their school management business and had turned to  securing contracts to  provide tutorial services and other products districts wanted. By then, Whittle had found private lenders who aided him in converting the publicly traded company again into a private one.

And then there is K-12 Inc., a for-profit company, that pulled in over $800 million in 2013 through selling online courses and curriculum, software, and blended programs to private and public schools. K-12 Inc also own cyber charter schools. 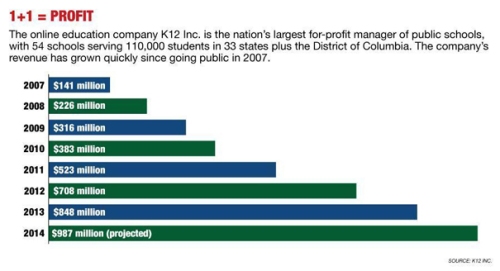 Recently, investigations have shown how K-12 Inc. squeezed money out of each of their operations to give investors a high rate of return on their shares.  Just a few weeks ago, former Teach for America alumnus and hedge fund investor, Whitney Tilson, who fits perfectly Diane Ravitch’s definition of a “corporate reformer,” is betting that K-12 Inc., is over-valued and will stumble. And he will profit from K-12 Inc. fall. Whether K-12 Inc. will weather the current storm and dip in stock price, I do not know. But such a major player in the school reform business sliding into bad times reminds me of what occurred nearly a half-century ago with performance contracting.

So what’s the point here? Sure, there is money to be made in the education market. After all, for decades big and small companies selling textbooks, classroom furniture, transportation, low- and high-tech equipment from blackboards (oops! green and whiteboards) to smartboards have profited from providing basic products and services to this stable market.  And do not forget major corporations like Pearson which has become the Goliath in educational products including the scoring tests  in both the UK and U.S. markets.

These profit-driven companies, and others like them (e.g., Apple and its iPads, Amplify and its tablets), however, do not take over schools or districts. They provide services and products for already existing agencies running schools, not the tough business of turning failing ones around. That is a sinkhole that many companies eager to turn a profit have slipped into in the past and are primed to do so now.