Fourth Anniversary of My Blog

This post marks my fourth anniversary as a blogger. I want to thank those readers who regularly read my twice-weekly posts, those who have dipped into them occasionally, those who have subscribed to the post, and finally those—nearly 5,000–who have taken the time to write comments.  The blog has had almost 600,000 views from around the world (32 percent outside of the U.S) since August 2009. Not exactly viral but, for me, most gratifying.

For the 482 posts I have written in the past three years, I have followed three rules:

3. Take a position and back it up with evidence.

Anyone who blogs or writes often knows that sticking to these rules is no easy task. Occasionally, I have slipped and alert readers have reminded me of these rules.  Yet after four years, writing two posts a week–with help from guests (teachers, administrators, non-educators, family, and academics)–has been very satisfying. I remain highly motivated to write about what happens to policy as it gets translated into practice and those unrelenting efforts of reformers with varied ideas inside and outside the schools who have sought improved schooling.

Five posts have caught the most clicks since beginning the blog:

“Data-Driven Instruction and the Practice of Teaching (over 16,000

“The Difference between ‘Complicated’ and ‘Complex’ Matters (nearly 14,000)

For the first time, a cartoon feature has entered the top five posts. Two years ago, I began a once-monthly series of cartoons on selected topics of teaching, administering, policymaking, and school reform.   For those who have not seen these cartoons, click on: “Digital Kids in School,” “Testing,” “Blaming Is So American,”  “Accountability in Action,” “Charter Schools,” and “Age-graded Schools,” Students and Teachers, Parent-Teacher Conferences, Digital Teachers, Addiction to Electronic Devices,  Testing, Testing, and Testing, Business and Schools, Common Core Standards, Problems and Dilemmas, Digital Natives (2),  Online Courses,  , Students and Teachers Again, “Doctors and Teachers,” Parent/teacher conferences,  “Preschools,”and “Life at Lincoln Middle School.”

As I begin my fifth year, I am not sure where I fit into Roz Chast’s breakdown of bloggers, but poking fun at those who blog is, well, part of being a blogger. Thank you again, dear readers, for making the past four years a satisfying experience. 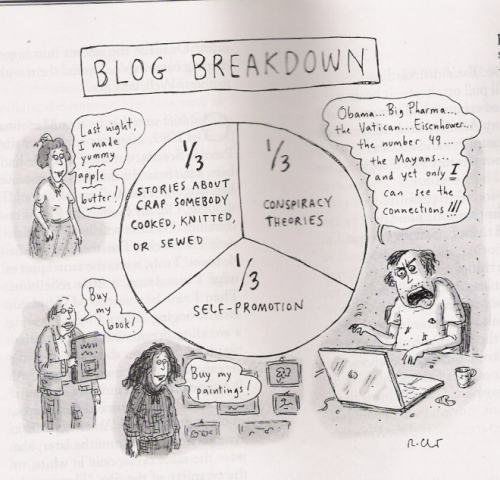 10 responses to “Fourth Anniversary of My Blog”