With the publication of Radical and a few years after founding StudentsFirst, a policy advocacy organization, former Washington, D.C. Chancellor of schools continues to push her reform agenda nationally, one that was severely burned when she exited the district after only three years in office. Well versed in being a celebrity, Rhee made the rounds of high profile media (e.g., Jon Stewart show) pushing her new book and the organization that she leads. So why should anyone kiss Rhee–“America’s most famous school reformer“– goodbye? 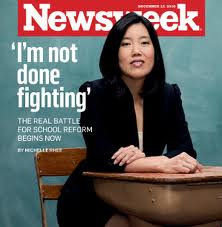 Because she is a divisive figure and damaged goods as an educator.  Both mean that her celebrity-hood as a school reformer–on the cover of Time magazine, chatting with Oprah and Jon–will give her visibility in 24/7 news cycle but not lead to any substantial elected or appointed political or educational office. 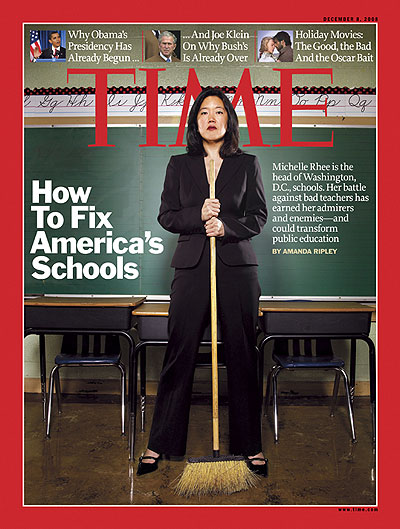 No President will appoint her Secretary of Education; no governor will appoint her state superintendent of education and no school board will appoint her as their school chief. She is a polarizing, radioactive figure who will set off Geiger counters and create instant political turmoil and  organizational instability–outcomes that may be good for media attention and garnering large speaker fees but disastrous for those responsible for making schools better and improving student performance. 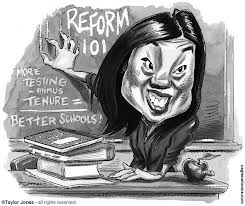 In the absence of actual work with states, districts, schools, and classrooms, her reputation as a divisive figure forever trailed by a dark hovering cloud of cheating on test scores will tarnish  her efforts to have any direct impact on students,  pushing her  further and further down the food-chain of celebrity status.  She will slip into the land where once highly touted educational celebrities such as Joe Clark   (here also) and Chris Whittle  (here also) became answers to the game: Whatever happened to _______ ?

Won’t her advocacy organization StudentsFirst lobbying state legislators for more charters, vouchers, performance evaluations for teachers, and the end of seniority for rehiring laid-off teachers make a difference? I doubt it for the following reasons.

Compared with the efforts of the deep-pocketed Koch brothers in influencing state legislatures through the American Legislative Exchange Commission (ALEC), or the well-funded Democrats for Education Reform (DFER), Rhee’s organization is minor league in political acumen,  expertise, and experience in political advocacy. Nor does StudentsFirst have any bench strength; it is all Michelle.If  she leaves the organization out of fatigue or pique, no more StudentsFirst. Moreover, such political work to be effective is back-channel and under the media radar. Such work is not Michelle Rhee, considering her few years in Washington, D.C. and since.

But there is something that Rhee can do to reduce the radioactivity, remove suspicions about her motives, and regain a pinch of credibility that she carried as a school reformer when the mayor of Washington, D.C. appointed her in 2007.

That something is for her to return to the classroom and teach for three to five years. Teaching will redeem her soiled reputation as a fame-seeking missile interested only in snatching the headline, the interview, the donor’s dollar. She will regain her credibility as someone who cares about school reform by teaching and working to have her students do well in school and in life. She might even move on, were she so inclined, to take state and federal leadership posts.

Although I hope she will make such a counter-intuitive move, for I do admire her energy, intensity, and commitment to students, I doubt that will occur. Celebrity-hood, once tasted,  becomes addictive and, so often, spirals downward as the addict seeks the next moment-of-glory fix. With regret, I blow a kiss goodbye to Michelle Rhee even now as she rides the cresting wave of “America’s most famous school reformer.”