Evidence: The Case of the Common Core Standards

I have admired Rodin’s statue of “The Thinker” for many years. 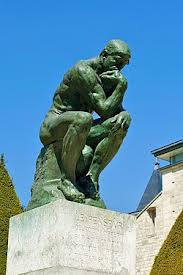 Yet the statue is not a man of action.

Too much thinking, too little action is a recipe for fecklessness. Yet too much action, too little thought are ingredients for a potential disaster.*

And this is where the Common Core standards enter the picture.

Exactly how much evidence did policymakers have to justify the crafting and adoption of national standards?  Of that evidence supporting the policy, what part, if any, did research play in making policy? Since evidence never speaks for itself–it has to be interpreted–these are fair questions to ask of any policy but especially one with high-stakes consequences for how teachers teach to the standards, what children and youth study in classrooms lessons, and tests used to measure how much of the standards students have learned.

There have been two major justifications for Common Core standards: (1) raising academic standards across U.S. schools will grow the economy and make the nation globally competitive; (2) higher standards will improve students’ academic achievement. After parsing these reasons for the Common Core standards, I then turn to the evidence used by policymakers and practitioners and where research studies fit (or do not fit) into the policymaking process.

1. What evidence is there that common standards will increase a nation’s global competitiveness?

2. What evidence is there that national standards will improve student achievement on domestic and international tests?

See here, here and even here.

So how can a public policy that has heavy consequences for students, teachers, and public schools have an appalling lack of evidence?

The answer is in what top decision-makers consider as evidence when they determine policy. Or the answer is in the simple fact that policies get made for many reasons, only one of which may be evidence, including research studies. I take up each of these explanations.

First, what do policymakers consider to be evidence? Generally, school boards, state and federal officials, and practitioners–teachers and principals–have a broader definition of evidence than do researchers who rely upon the results of randomized control studies, rigorously conducted case studies, and carefully constructed interventions in schools (see Tseng-Social-Policy-Report-2012-1).

In an ongoing study of school boards’ decision-making, for example, Robert Asen and colleagues found that local policymakers drew from many sources for “evidence.” They relied on first-hand experiences,   systematically collected data on conditions, testimony of authoritative individuals and groups, specific examples that illustrated the policy issue being discussed, and, yes, they used empirical findings culled from researchers. What constitutes evidence to school board members was a broad array of experience-produced and research-produced knowledge, some carrying more weight than others in each policymaker’s mind. Few decision-makers, however, say that research findings guided their actions (coburnhonigsteinfinal-1).

Second, what drives policymaker decisions? Many reasons propel policy and evidence is only one of those reasons. Consider that financial and political pressures push policy without any reference to “what the research says.” When drug abuse or teenage pregnancies rise in a community, parents and politicians lobby school boards to initiate or revamp drug and sex education programs–regardless of what research studies say about the effectiveness of such programs. Or to cite another example, when a program becomes controversial such as “Man: A Course of Study” in the 1970s, studies of its effectiveness are disregarded as pressure groups got school boards to dump the program.

Or consider evaluating teachers on the basis of student test scores–one of the public reasons given for Chicago teachers striking this month. U.S. Secretary of Education Arne Duncan had, at best, contested   research findings a few years ago when he required performance evaluations to be included in state proposals for Race To The Top funds. Or even now. Political considerations mattered, not the amount or quality of evidence.

In an economic recession when state revenues shrink, districts cut staff and programs without checking research studies to determine which programs or staff were effective.

So local, state, and federal policymakers have a broader view of what constitutes evidence–practitioners even more so–than researchers. Research studies play a minor role, if at all, in making most significant policy decisions.

Which, of course, brings me around full circle to Common Core standards which is a train carrying few research studies that has left the station on its way into the nation’s classrooms. Believe me, that train is not carrying statues of Rodin’s “The Thinker.”

59 responses to “Evidence: The Case of the Common Core Standards”