For this monthly* post of cartoons, I have selected images about the impending Common Core curriculum standards in math and English for K-12 students. While many countries have a national curriculum, the U.S. does not. Since the Common Core standards have been adopted by 46 states and the District of Columbia, the U.S. will soon have a national–not federally mandated–one.

According to a recent analysis of the Common Core standards there are two justifications for states adopting the standards (Brookings Study of Common Core):

1. Because current state standards vary greatly across the country resulting in unequal access to knowledge and skills, Common Core standards will be higher, uniform, and equitable for all students. When tests of those common standards are implemented in 2014-2015,  the quality of teaching and learning will improve. Students will then score far better on international achievement tests and the U.S. economy will grow.

2. By standardizing curriculum and assessments across states, multiple textbooks and instructional materials in math and English (and other academic subjects) will be reduced. These texts will aligned to national standards and tests. Major efficiencies will then occur.

There is, of course, another reason for adopting Common Core standards: schools are instrumental to economic growth and better schools will translate into success in besting global competitors in the  unending race for new markets. 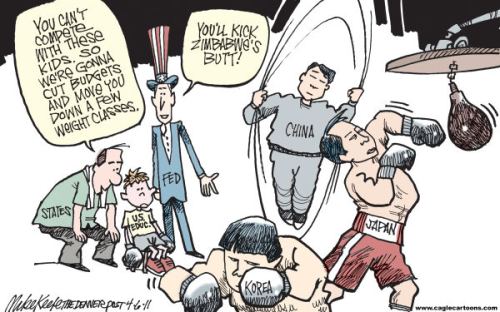 There is much that remains unknown, however, about how these standards are to be implemented and much anxiety over new tests to measure how well students have met those standards. 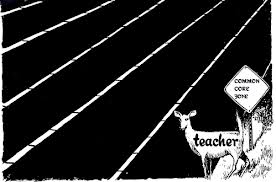 Teachers were interviewed a few months ago and this is what they reported to the poll-takers: 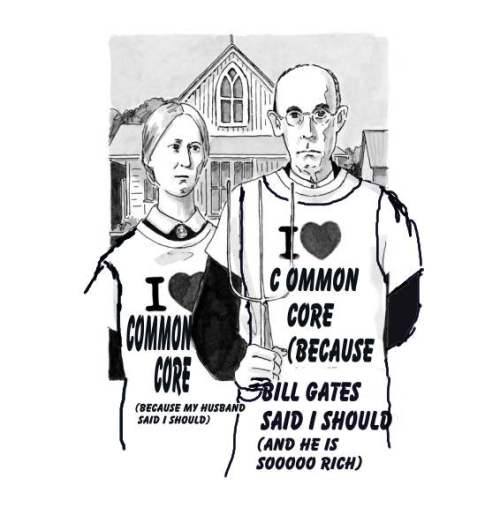 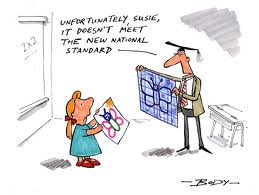 *Two of the above cartoons (American Gothic and the bucket list) originated at Susan Ohanian’s blog at: www.susanohanian.org.

I have done one post a month of cartoons on different topics linked to school reform and classroom practice since September 2011. Readers who wish to see previous monthly posts of cartoons, they are: “Digital Kids in School,” “Testing,” “Blaming Is So American,”  “Accountability in Action,” “Charter Schools,” and “Age-graded Schools,” Students and Teachers, Parent-Teacher Conferences, Digital Teachers, Addiction to Electronic Devices,  Testing, Testing, and Testing,  and Business and Schools.